The Midwestern prairies are famous for their large, showy flowering plants like purple coneflowers and black-eyed Susans. But, there are lovely smaller ones, too. Prairie smoke (Geum triflorum) is an interesting one that grows in early spring.

Each spring, the melting snow uncovers a green rosette of hairy, fern-like leaves often tinged with burgundy. The rosette begins to grow, and a few weeks later, one or more stalks appear in the center of the rosette. Each carries a small group, or umbel, of three flowers. The five outer petals are pink-to-reddish colored and tightly cover five white petals forming a bell-like shape. Because the small flowers barely open, they are primarily pollinated by bumble bees, which are burly enough to push inside. 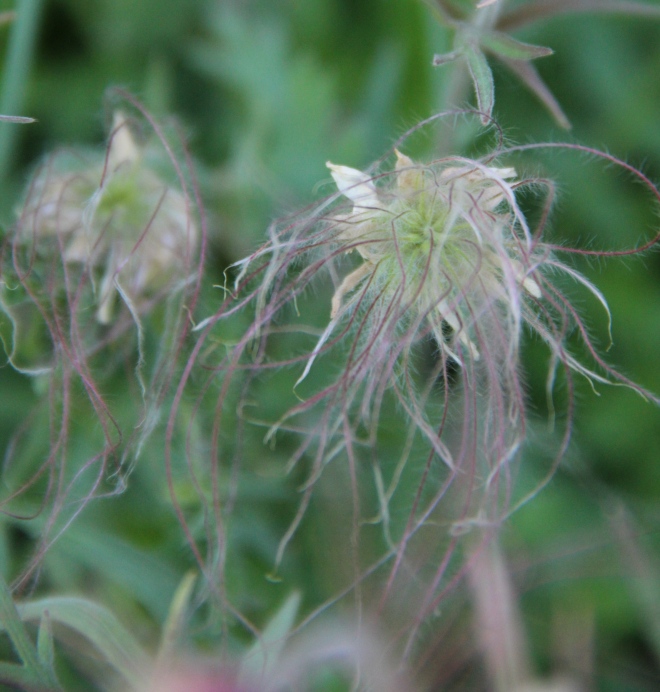 After several weeks, the flowers turn upward and form small, one-seeded fruit that are attached to long styles covered with silky hair. The wispy appearance of the fruit led to the colorful names of prairie smoke and old man’s whiskers.

Another seed plume of prairie smoke or old man’s whiskers.

In its native habitat, prairie smoke prefers sunny, dry soil that is rocky or sandy. In our garden, it’s happy growing near the top of a limestone wall where it receives direct sun and has good drainage.