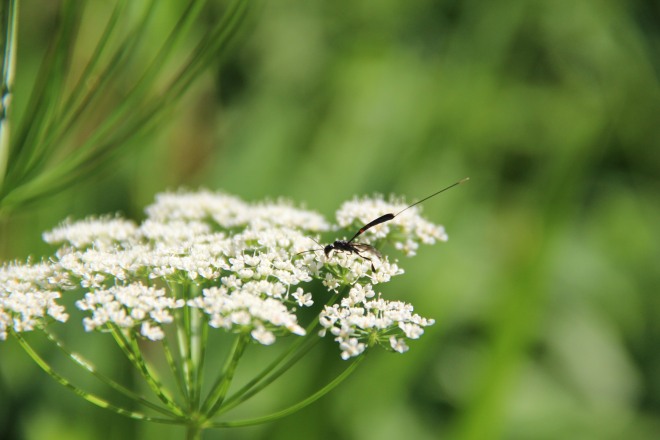 One recent evening, a thread-thin burst of movement caught my eye in our garden.  It was a wasp —  slender, agile and fast as it nectared in the early evening sun; and unlike most wasps, it held its abdomen at an unusual vertical angle.  It was too thin and small to fit into the familiar wasp categories.  After searching several resources, I identified it: a carrot wasp in the family Gasteruptiidae spp.  (There are 15 different species in North America.)  Adults feed on the nectar and pollen of plants in the carrot family, especially wild carrots and parsnips. 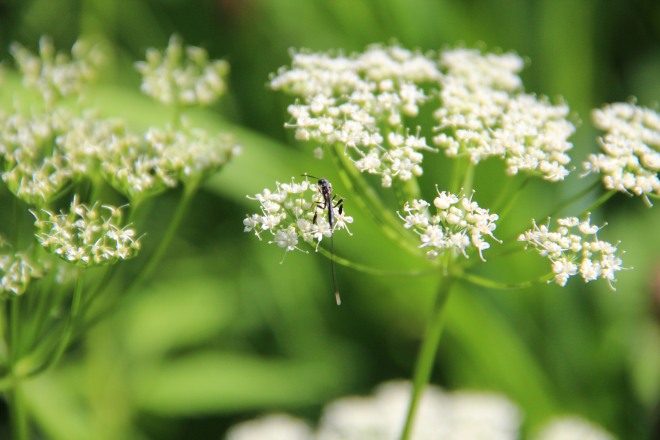 Carrot wasps have enlarged areas on the back legs and the female has a long ovipositor.

Carrot wasps are a type of parasitic wasp.  Rather than building a colony, or their own individual cells, they seek out the nests of other solitary bees and wasps, such as digger bees and mud daubers.  A female carrot wasp punctures a cell of the other bee or wasp’s nest, inserts her long ovipositor into the cell and lays her egg.  Depending on the type of carrot wasp, when its egg hatches, the larva will eat the host bee/wasp’s larva, eat the larva’s food, or do both!

Besides the abdomen being held vertically, other identifying characteristics include a visible, prominent neck, a black body with reddish-orange bands on the abdomen, and enlarged areas on the back legs.  These wasps are most common during June, July and August.