The week’s mild air and slow, steady melt have given voice to the first cardinal songs and chickadee whistles. Robins also call softly throughout the neighborhood. It’s too early to look for bulbs and other new life in the garden, but there’s a lot happening under the snow. I’m excited about the thaw and had a peek at what goes on under the white blanket during the winter!

Where the snow melted away from the lower stalks of a climbing rose, I found bracket fungus growing on the remains of an old stalk that died several winters ago. I hesitated to cut it down (for fear of damaging the plant) and left it alone. Now, nature is returning it to the earth on its own schedule. The fungus, also known as shelf fungus, breaks down the main components in the dead wood and returns them to the soil.

Bracket or shelf fungus, with their striations, remind me of freshwater clam shells.

I also found a few patches of bright green moss exposed by the melt. I think it is fire moss (Ceratodon purpureus), which remains green under the snow throughout winter. Like the fungus, it is an ancient plant that evolved more than 500 million years ago. The moss breaks down rock and other components that enrich the soil. Moss also helps prevent erosion by holding water and soil in place. Its fresh spring green is a beautiful contrast to winter’s formal black and white.

Fire moss stays moist and green under the snow. It builds soil and helps control erosion.

Both plants replenish the earth and prepare for spring growth. So, in a few months, as you enjoy the beauty of spring bulbs, budding trees and blossoming perennials, remember the lowly fungi and moss that return nutrients to the earth and restore soil to nourish the circle of life. 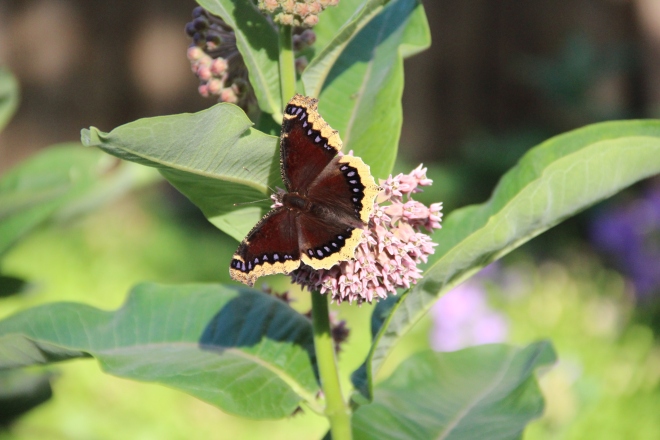 Living things like this mourning cloak and common milkweed, benefit from the hidden actions of fungi and moss under the snow.