The scent of sweet clover, insect songs and heat ride the wind along this country road.

The farm road near our cabin is bright, hot and breezy on high-summer afternoons. Musical chirps, metallic clicks and shrill whines of crickets, grasshoppers and cicadas wash over the fields. At mid-August, bird song is minimal — a few call, but do not sing. Most vocal are American goldfinches, with their lilting calls and flight. There are eastern bluebirds and an eastern kingbird. A broad-winged hawk circles a few times whistling its high, quavering note.

The dairy farmer who owns these fields, borders them with several feet of perennials — common milkweed, red clover, rabbit-foot clover, monarda, native sunflowers, blue vervain and goldenrod. Not only do these swaths of plants help stop runoff and pollution into the nearby Snake River, they also support bees, butterflies and other pollinators. Today, painted ladies, monarchs, eastern-tailed blues, yellow sulfurs, cabbage whites and mourning cloaks zip quickly through the hot, sunny air. Painted ladies dominate the aerial dance. Dozens swoop and swirl around us in the roadside flowers, and fly up from the wet, sandy road where they drink water and minerals.

Painted ladies (Vanessa cardui) nectar on prairie fleabane (Erigeron strigosus) in the field borders, which are critical habitat for many forms of wildlife.

Common milkweed (Asclepius syriaca), a crucial source of nectar for monarchs and other pollinators, borders fields of corn and soybeans.

The road winds into groves of hardwoods along the river. Red and white oak, basswood, willow and silver maple shade the road and lower the air temperature by several degrees. Now goldfinches are accompanied by the nasal “yank-yank” call of white-breasted nuthatches, scrappy blue jays and the gurgling calls of tiny black-capped chickadees. The woods are much cooler, still lush and green with ferns, river grapes, Canada ginger, false Solomon’s seal, and the ripening green-blue berries of sarsaparilla. Mushrooms pop up in shady, damp areas and I spot russulas, white puffballs, bracket fungi and others whose identity I don’t know.

Oaks, basswood, and maples arch over the road along the Snake River. Their shade refreshes us on this sultry afternoon.

Ferns and Canada ginger (Asarum canadense) flourish with oaks near the river. 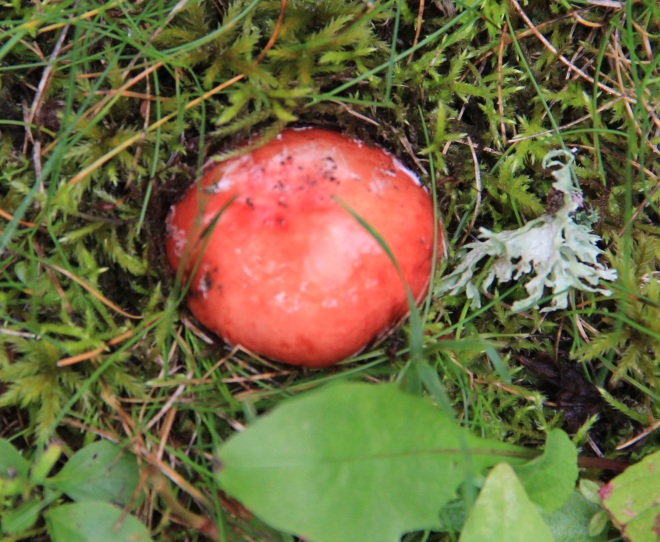 The week’s thunderstorms raised the river more than a foot. Water burbles and tumbles over rocks and  riffles. Ospreys, eagles and belted kingfishers frequently fish these waters. I hear the kingfisher’s rattle offset by the more plaintive calls of the larger birds of prey. 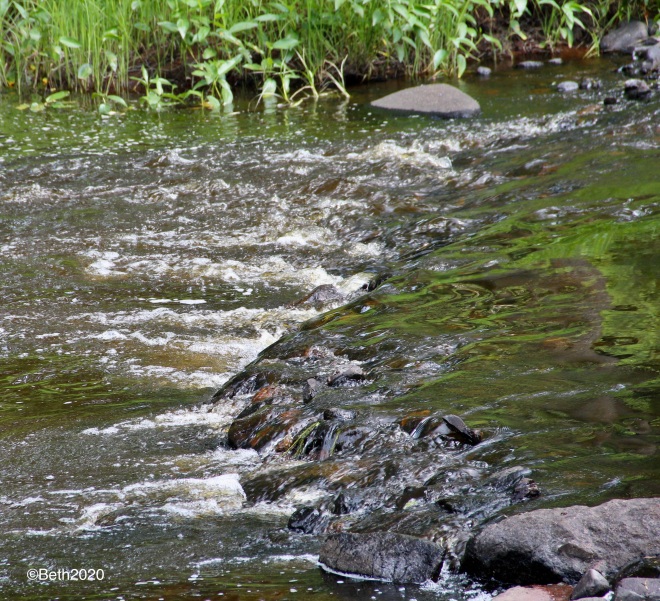 Water tumbles over river rocks and creates a bubbling melody.

We leave the woods and river once again and return to the hot August sun and breeze. I close my eyes and stand quietly. The wind ripples fields of hay, soybeans and field corn. It smells so good — ripe grain and grass, damp earth and sweet clover. I memorize the scents, sounds and heat of high summer. I will hold them close when the inevitable winter returns. 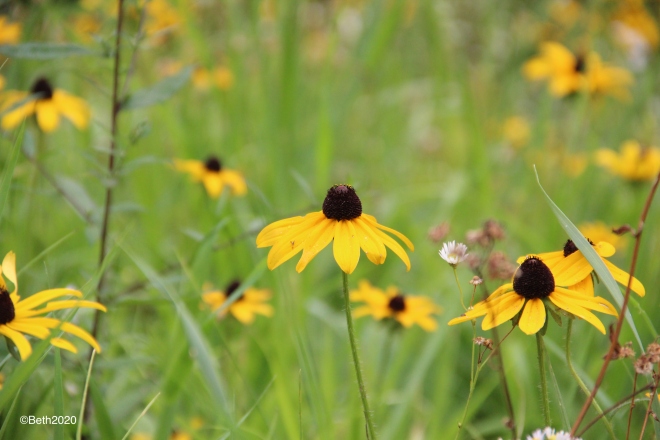 Native black-eyed Susan’s (Rudbekia hirta) spring up along most country roads in August. 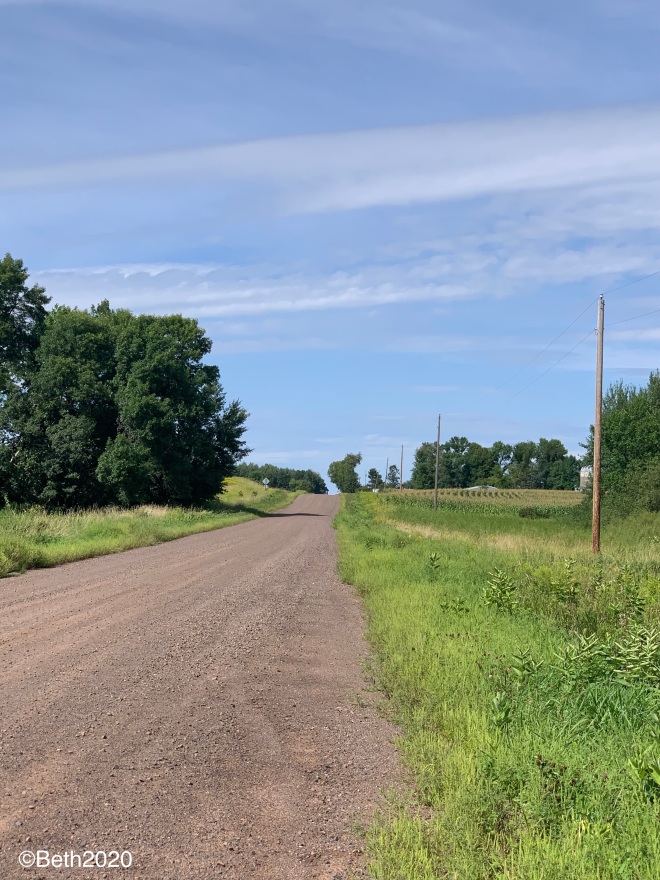 Wind, sun and insect song create a peaceful setting along a rural road in Central Minnesota.