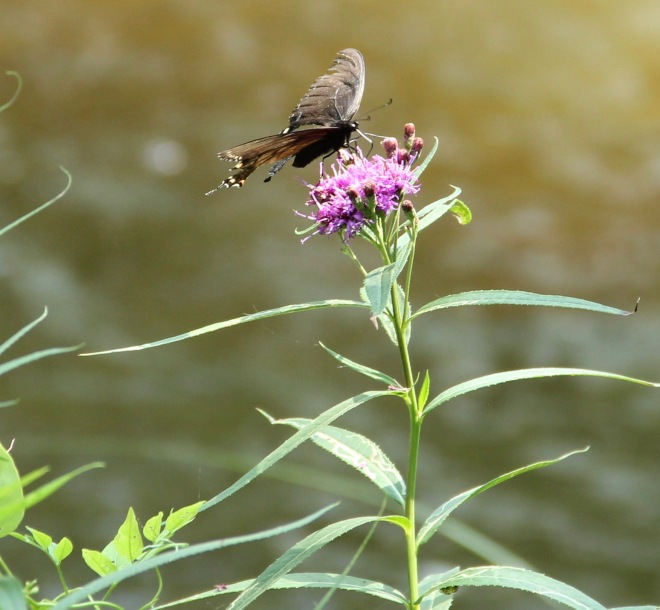 It was an unexpected gift on an August afternoon: A black eastern tiger swallowtail butterfly, its wings faded and worn, even tattered in places, showing its age.  It settled in for a long drink of nectar from an ironweed flower on the banks of the Snake River in Pine County, MN. We’re more likely to see the yellow form of the tiger swallowtail in the North. The black form occurs much less frequently and only in females. The butterfly’s name refers to the long projections on its tail, which resemble a barn swallow’s tail.

In the northern United States, eastern tiger swallowtails typically fly from mid-May to late August or September. They usually have two broods per summer, and the young of the second group overwinter as chrysalids to emerge the following May. The caterpillars are bright green with two blue eye spots. (They turn brown when ready to form a chrysalis.) They mainly feed on the leaves of trees such as wild cherry, chokecherry, basswood, cottonwood, ash, willow and maple. Adults nectar on many types of flowers, but prefer wild cherry and lilac in spring, Joe-Pye weed and milkweed during the summer.

The name swallowtail comes from the long tail projections that resemble a barn swallow’s tail.

The ironweed on which I spotted it belongs to the Composite family, which also includes coneflowers, sunflowers, daisies, goldenrod, Joe-Pye weed, asters and others. Ironweed is a native perennial, prefers full sun and often grows near marshes, along riverbanks, edges of moist fields, and wet prairies. It’s typically 4-to-6 feet tall and its violet-colored flower clusters are often visited by bumblebees. The black tiger swallowtails seem attracted to ironweed and I’ve seen them on the blossoms in past years, too. I enjoy seeing both forms of the butterfly. 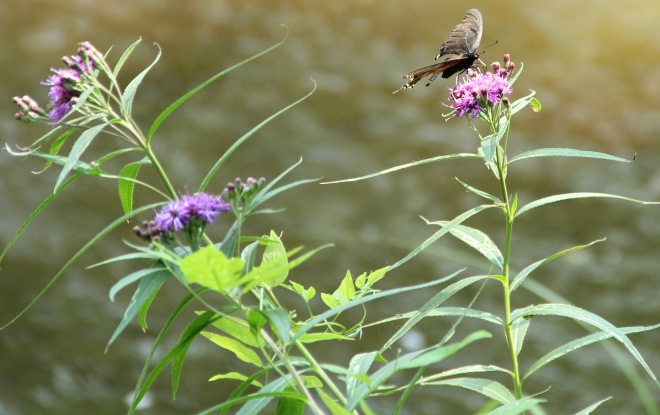 Ironweed (Vernonia fasciculata) grows on the banks of the Snake River in Pine County, Minnesota.