The tiny, high-energy nuthatch is one of my favorite winter birds. Why the curious name “nuthatch”? “Hatch” was the Middle English word for hack or pound: nuthatches obtain much of their food by placing acorns and other nuts in bark crevices to hammer or hack open. They also store nuts and seeds under loose pieces of bark. Occasionally, I’ve seen red-breasted nuthatches with tiny twigs in their mouths and wondered if they were levering seeds out of a hiding place.

If you live near woods, or have trees in your yard, you’re likely to hear and see nuthatches. The white-breasted nuthatch is a year-round resident in Minnesota, and in most of the United States, Mexico and part of southern Canada.1 Its smaller cousin, the red-breasted nuthatch, is present in fewer numbers during the winter because most remain on their northern breeding grounds — unless there’s a shortage of spruce seeds, their primary food. In that case, they migrate in large numbers to the northern and eastern United States. This movement is called an irruption and it’s happening in 2018. (I saw my first red-breasted nuthatch of the season in our backyard on August 27.)

Similar in size to a house sparrow, the white-breasted nuthatch is a small bird with a big voice. I hear them call on the coldest winter days when most birds are silent. Its call is described as a nasal “yank-yank”. During the breeding season, the males also make a nasal “wha-wha-wha” song. They like deciduous trees, especially white oaks. Favorite foods include the nuts or seeds of oak, hickory, beech, maple, pine and spruce in the winter. They often come to suet and sunflower seed feeders, too. Insects and spiders are choice foods for the summer.

This red-breasted nuthatch (Sitta canadensis) carries a shaving of red pine bark, which it broke off of the tree. (Photograph used with permission.)

The tiny red-breasted nuthatch is present year-round at our cabin in east central Minnesota. Smaller than its white-breasted cousin, it’s about the size of a kinglet. Its song is also a nasal,“yank-yank,” however, it is higher pitched and has been compared to the tone of a toy tin horn. They frequently make fast, high-pitched squeaking calls. Red-breasteds favor coniferous forests, but can also be found in deciduous woods, parks and yards during a winter irruption. They eat the nuts of spruce and other conifers in the winter, and visit feeders for suet, sunflower seeds and peanuts. Insects and spiders are summer favorites.

Nuthatches are cavity nesters — red-breasteds often select dead aspens because the wood is soft and easy to excavate. White-breasteds nest in both deciduous and conifer trees — they’ll frequently use an old woodpecker nest, rather than dig out a new cavity. Both build a bed of grass and shredded bark, then line it with fur, feathers and other soft material. Each species raises one brood per year.

White oaks are a favorite food source of white-breasted nuthatches. 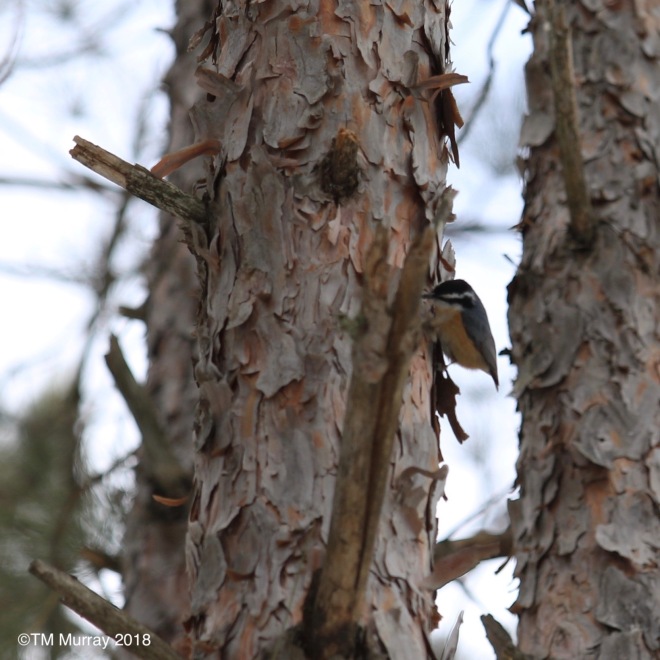 When you’re outside on winter days, listen for nuthatch “yank-yank-yank” calls and keep an eye on tree trunks for tiny blue-gray, black and white birds intently inspecting the bark. Since nuthatches often join small flocks of other winter birds, you might also see downy woodpeckers, brown creepers, chickadees and kinglets as an added bonus!

1North America has four species of nuthatch: the brown-headed and pygmy nuthatches, in addition to the white-breasted and red-breasted nuthatches. There are 25 nuthatch species worldwide.