This year, I look for spring close to home. I haven’t hiked in a nature preserve yet, and we’ve stayed home from our cabin. I miss those places, but I’m enjoying many simple delights right here, including a few native spring flowers. While bloodroot blooms fade, another spring native, hepatica, buds and opens. 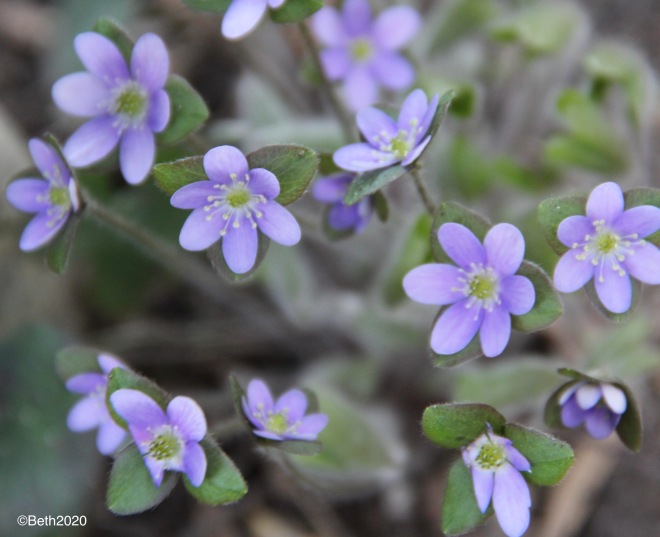 Hepatica, liverleaf, or liverwort, is named for its leaves that are three-lobed and can be a brownish-bronze color (like the human liver) at winter’s end. Each spring, the fuzzy flower stalks push up through the old leaves to bloom in pastels ranging from white to purple. In Minnesota, hepatica can begin blooming anytime from early April into May — before the trees leaf out. Bees, early butterflies, beetles and flies pollinate the small flowers depending on how early they bloom. Fresh green leaves will grow up from beneath the flower stalks to remain until next spring. 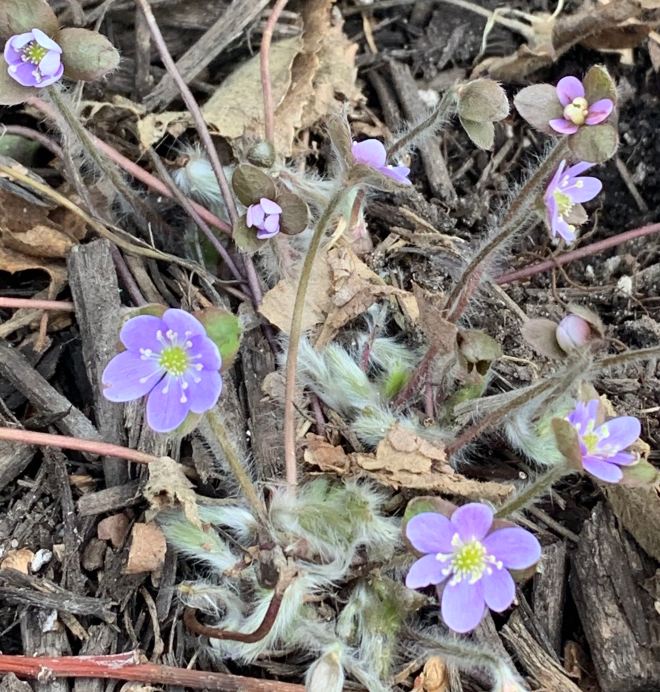 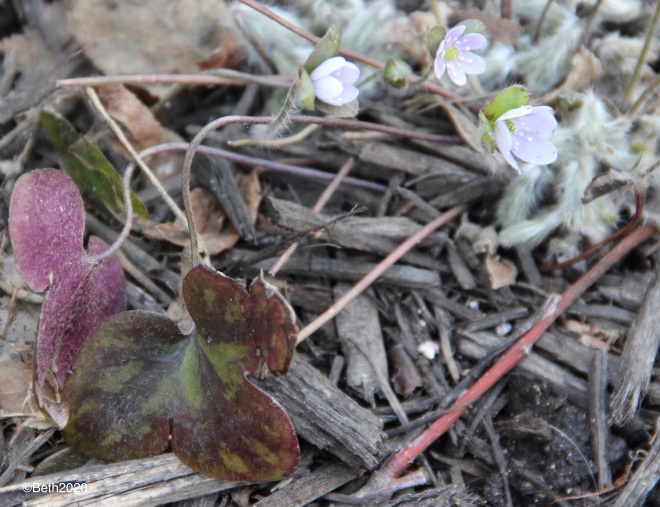 Hepatica leaves are three-lobed. The previous year’s leaves are often brownish-red or bronze and reminded earlier people of the human liver. (Hepatica is from the Greek word for liver.) 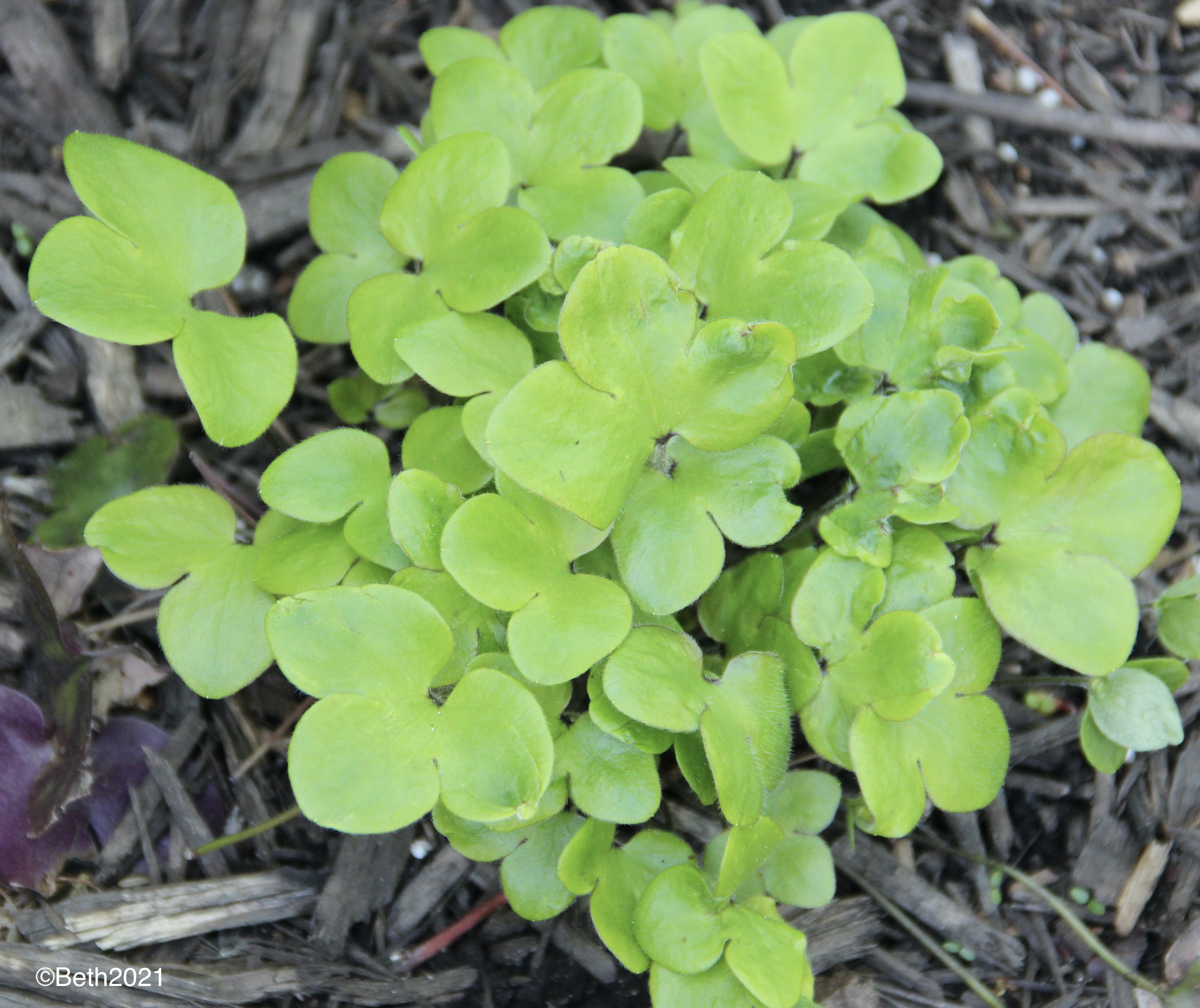 New green leaves grow beneath the flowers and will last all season.

In it’s natural setting, hepatica often grows under oak trees — that’s where I first spotted it peeping out among tattered brown leaves one warm April day at our cabin. (I purchased the hepatica in my garden at a local nursery.) It is a woodland wildflower that prefers full spring sun that becomes dappled sun as the trees leaf out. Two species are native to Minnesota — round-lobed and sharp-lobed — and are very similar in appearance. It’s also very well-behaved, so a gardener needn’t worry about hepatica overtaking the garden!

This week in the yard, besides the blooming hepatica, bloodroot leaves unfurled and increased in size as seed pods swelled. Many tiny native bees, and a not-so-tiny queen two-spotted bumble bee, pollinated the spring flowers. A wave of hermit thrushes ate insects and seeds in the backyard most of the week before continuing north to their nesting grounds. 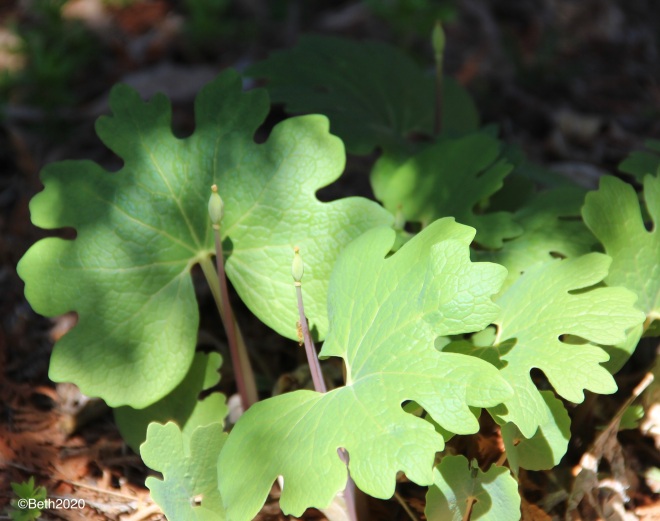 As the bloodroot blossoms (Sanguinaria canadensis) wilt, the leaves unfold and the seed pods begin to swell. 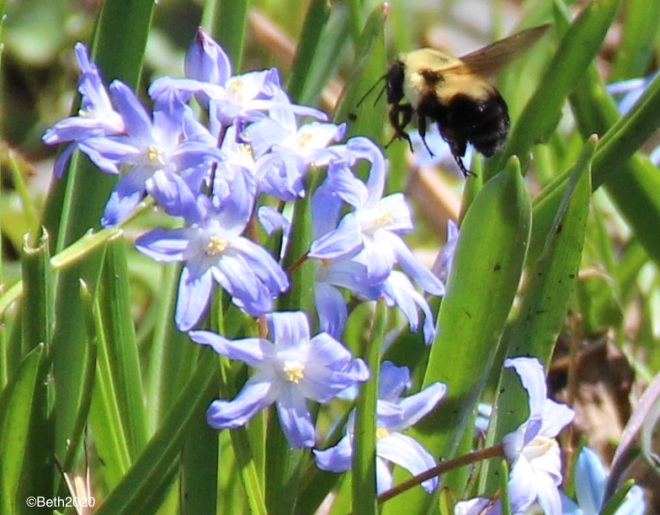 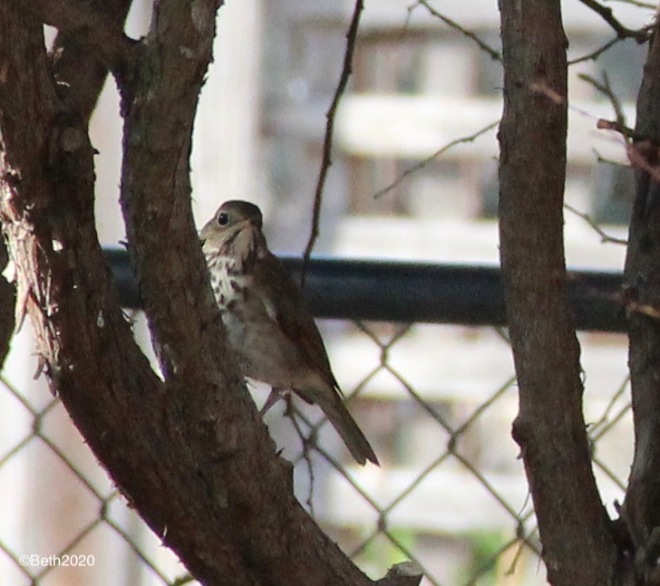 A hermit thrush (Catharus guttatus), one of the most ethereal songsters I’ve heard, rests on its journey to northern Minnesota and Canada.

Nesting sites are a hot commodity locally, too: A female mallard sits on her nest completely hidden in our neighbor’s daylily garden. Robins nest in arbor vitae behind the garage and cardinals nest in a neighbor’s small evergreen shrub. Each day, the cardinal pair visits our garden where the male gently feeds his mate. In a few weeks, the begging calls of this year’s first fledglings will fill the air. I look forward to seeing their plump, downy bodies following their parents around the garden!