In late November, most leaves have fallen to the ground, turned brown and tucked Earth’s northern regions in for the long winter.  But the bareness reveals new beauty in the form of a harvest of berries.  Many colorful berries decorate trees, shrubs and vines, both here in St. Paul and in the woods surrounding our cabin on the Snake River in Pine County, MN.  They also provide food for many birds and small mammals.  Here is a sample of this generous harvest:

Six species of dogwood are native to Minnesota.  Among the  most colorful are gray dogwood and swamp dogwood, also known as silky or blue dogwood. 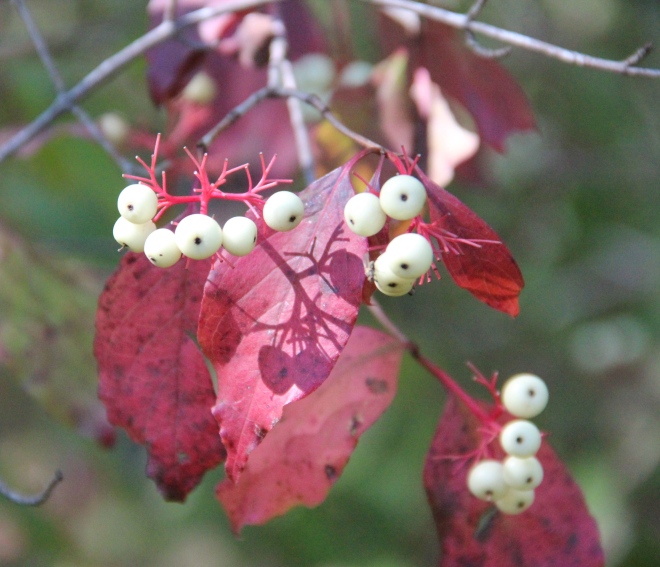 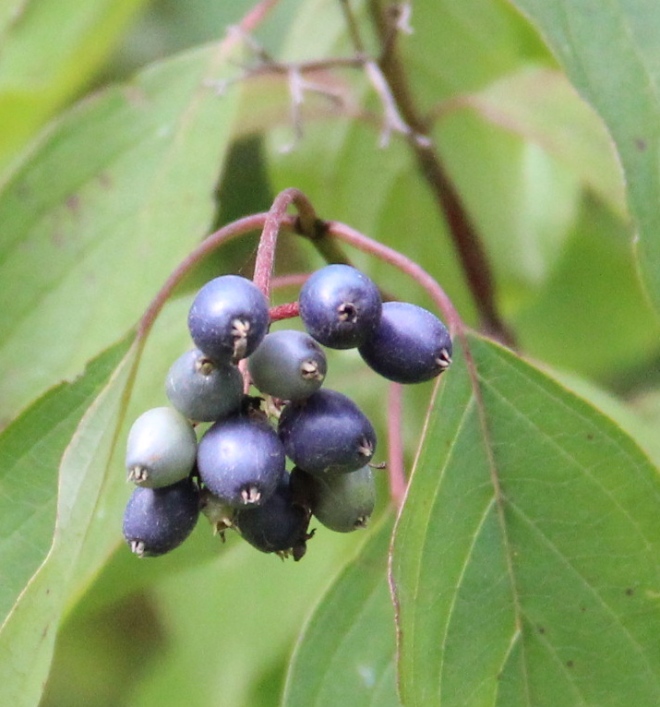 Native hawthorns (Crataegus) are small trees, with long, sharp thorns, that produce a beautiful red fruit or “pome” eaten by many songbirds.

American woodbine’s scarlet leaves have fallen to reveal deep-blue berries on fire-red stalks or pedicels.  Woodbine is a close relative of Virginia creeper, but prefers sunnier locations and lacks adhesive cups at the end of its tendrils. 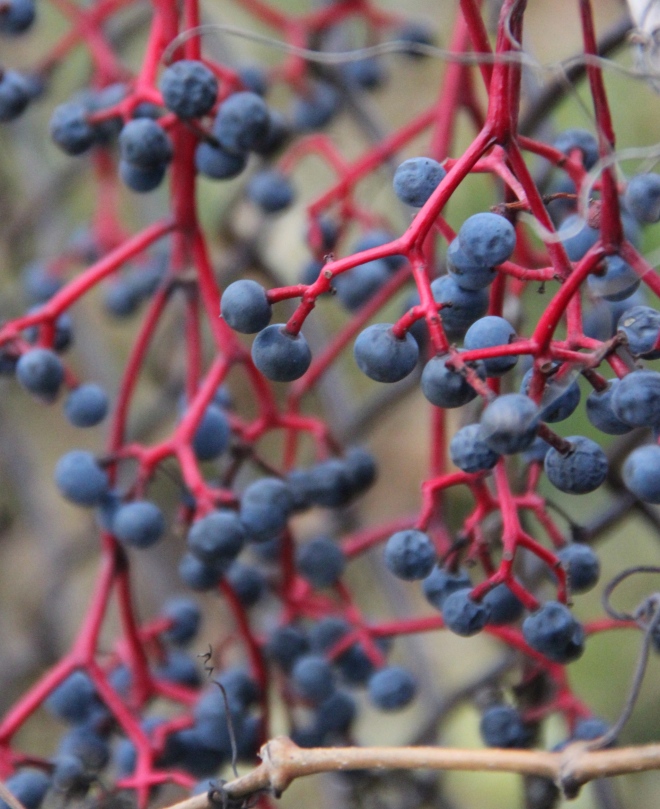 American woodbine (Parthenocissus inserta) berries are a winter food source for some species of songbirds.

Many species of rose, both native and cultivated, produce beautiful fruit known as “hips”.  Rose hips are rich in vitamin C and other nutrients. 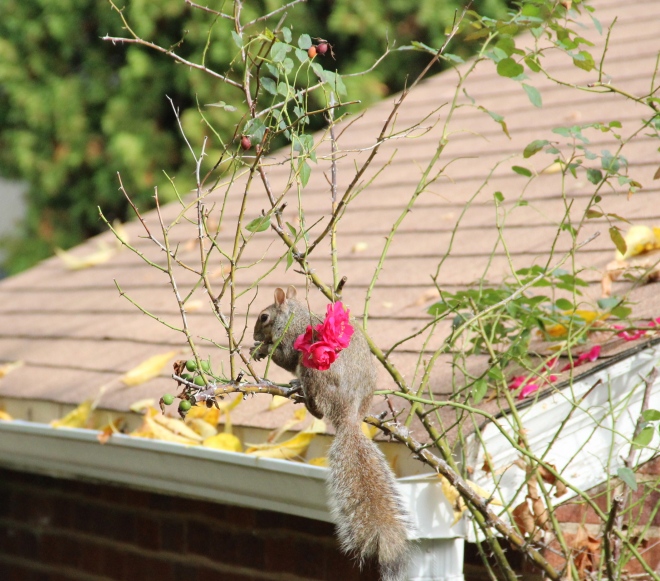 Squirrels eat the fruit or “hips” of (Rosa ‘Henry Kelsey’) before the fruit has even ripened. 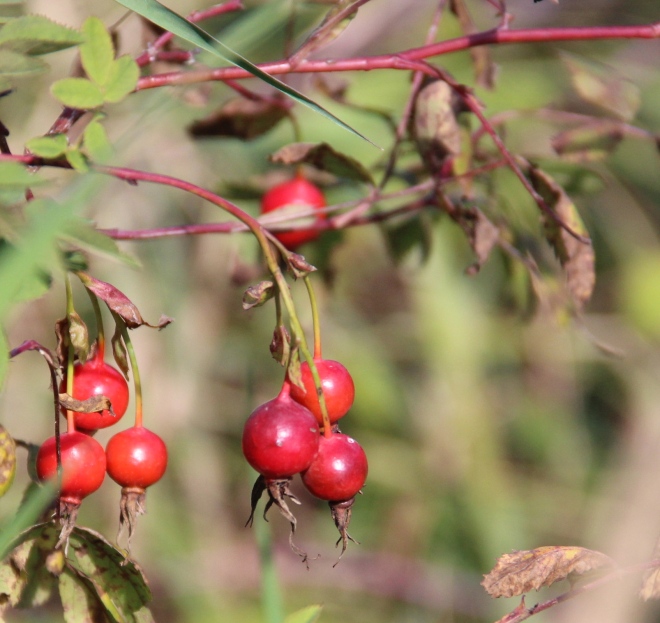 The feathery white plumes of starry false Solomon’s seal have grown into plump berries that gradually changed from bright green to beige mottled with coppery red, and now are bright, translucent red. 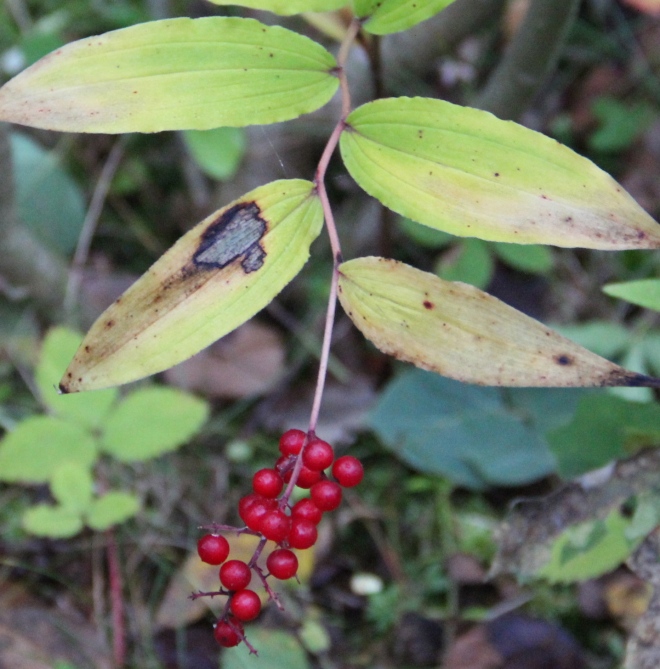 It’s a breezy, clear, mid-August morning at the Snake River in east central Minnesota.  An old silver maple creeks in the wind and a pileated woodpecker’s call rings through the woods.  Trees, thickets and river grasses show lush shades of green.  I am so glad to see no hint of autumn in them yet. But, other plants tell a different story.  The berries of false Solomon’s seal grow red, chokecherries and currants ripen to purple, and hawthorne fruit and wild rose hips begin to blush.  Hickory and hazelnuts are plump and the fragrant basswood flowers of a few weeks ago are now little round nutlets. 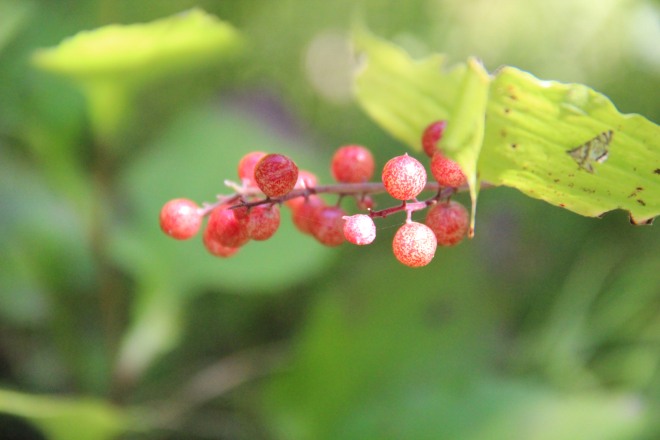 Flowers are changing too.  Turk’s-cap lilies, meadow rue and vetches have been replaced by woodland sunflowers and lesser purple fringed orchids.  The first goldenrod buds are turning yellow, and harebells and heal-all continue to bloom. 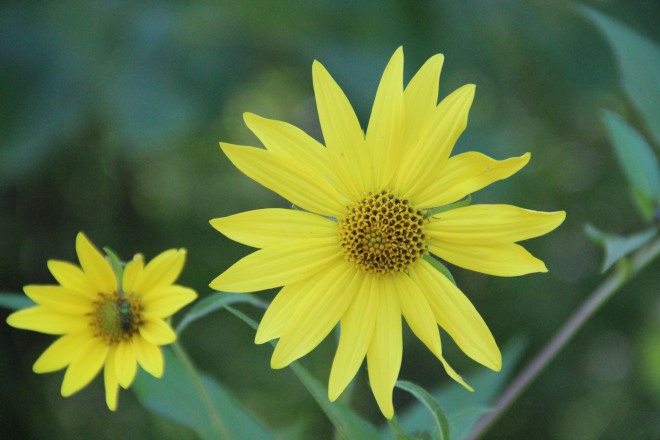 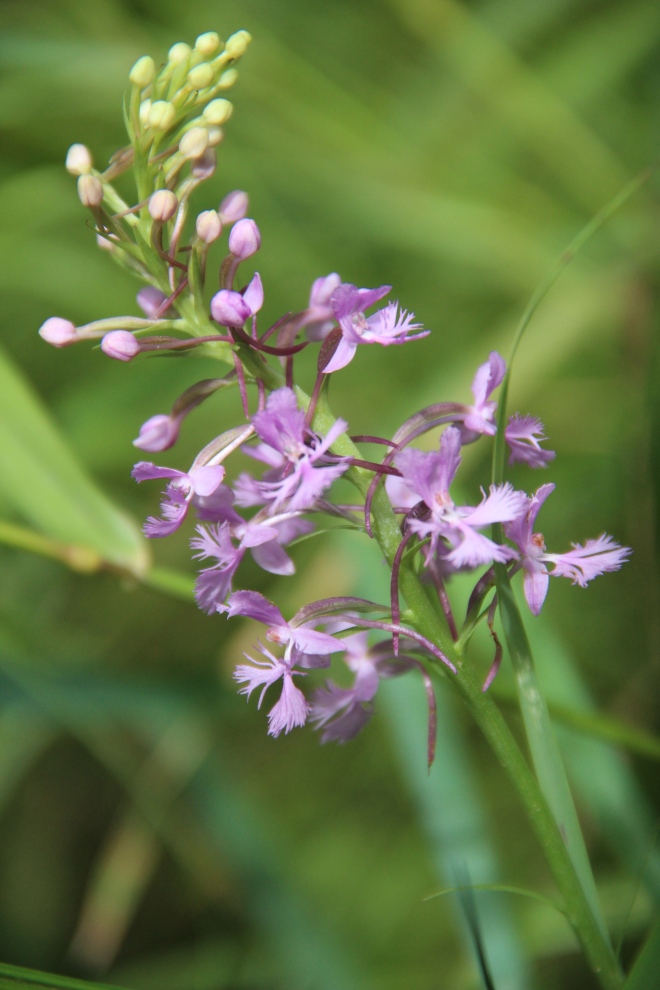 The woods are much quieter than in July.  Most birds have finished breeding and their babies have grown, putting an end to the feeding frenzy.  I miss the morning and evening chorus — especially the ethereal vespers sung by the wood thrushes.  Fortunately, the last few mornings, a family of five blue jays visited our hazelnut thicket.  They call softly to each other as they pluck the nuts, hold them against a tree branch and peck open the husk.  These jays are more elusive than the jays in our city yard.  They retreat deeper into the woods when I sit outside and try to photograph them.

In the late afternoon, a lone cicada buzzes.  Grasshoppers and crickets trill softly and are joined by snowy crickets and katydids in the evening.  Their night music, though simpler than birdsong, complements the burble of river water over rocks and gently soothes as darkness falls.